Teufelsberg takes its name from the Teufelssee, located at the south-west side of Teufelsberg. The lake is of glacial origin and its name is derived from a pre-Christian place of worship in this area. The eastern side was the location for Berlin’s first waterworks, built between 1872-1873. It closed in 1969 and is now used by the nature centre Ökowerk Teufelssee. Nude-bathing takes place on the lake’s southern shore.

Before the creation of the artificial hill of Teufelsberg, the land in this area was completely flat and buried deep beneath Teufelsberg are the remains of an uncompleted 1937 military technical college. The gigantic building was designed by architect Albert Speer (1905-1981) and included a secure underground bunker beneath the faculty. In 1939, the construction was halted when resources were shifted to other military projects. Therefore during the war years, instead of a school, it became a store for ammunition.

Following World War II, the bombed city of Berlin needed to find locations to dump all the debris from the destroyed buildings. The immense structure of the military technical college presented an ideal foundation to pour all the bricks and concrete. This was the birth of Teufelsberg, an artificial hill built from vast quantities of rubble removed from the centre of West Berlin by over 800 trucks. Soil was then poured on top of the rubble.

In the mid-1950s, a 24 meter ski jump was built on Teufelsberg. In 1964 it was enlarged into a K50, complete with ski lift, plastic covering and floodlights. It attracted Olympic Gold Medal winner Georg Thomas. The last competition took place in 1969. Following dilapidation, it was finally demolished in 1999. 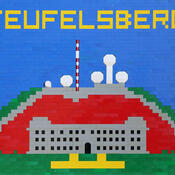 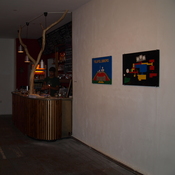